The Team has worked for the development of models for the simulation of various processes taking place during the production of bottle-glass in a Greek glass industry (industrial partner: Valavanis Bros, Larissa Greece). Principally, our investigation was focussed on the simulation of flow and transport phenomena (including radiation heat transfer) of glass-melt in the melting tank. The developed model was able to predict flow and transport phenomena of discrete phases (including bubble and grain growth, dispersion and dissolution). Additional models were developed for the study of the turbulent combustion (air or oxygen enriched) in the glass furnace for the study of optimum positions of the burners in order to succeed maximum heat transfer and mixing of the glass-melt, which is placed above the furnace. The environmental consequences of the exhausted gases and particles from the chimneys of the factory were also predicted with the development of models for the turbulent flow of the exhausted gases involving also the dispersion of the discrete phase. Results were also obtained for the spatial distribution and the concentration of exhausted gases and particles for the range of winds recorded at the specific area site of the factory. 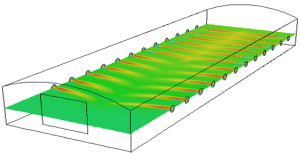 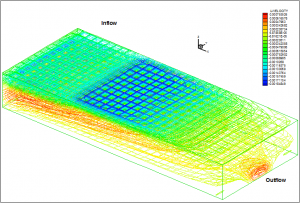 Collaboration with a local industry produces hydraulic parts made of copper for the simulation of the water flow inside the parts and the estimation of the local pressure losses. 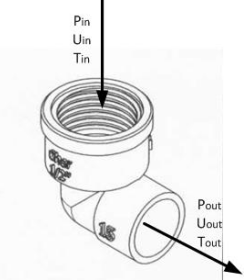