From the beginnings of 1970s researchers were studying the concept of magnetic guided drug delivery method. The concept of this method is to attach the drug to the micro- or nanoparticles and then to inject them to the bloodstream. For the guidance to the targeted area, a Magnetic Resonance Imaging (MRI) device is needed. By making use of the magnetic guided drug delivery method, the quantity of the drug required to reach therapeutic levels is being reduced. Also, the drug concentration at targeted sites is increased. 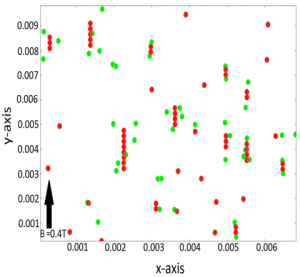 For the propulsion model of the particles, six major forces are considered, i.e. the magnetic force from MRI’sMain Magnet static field as well as the Magnetic field gradient force from the special Propulsion Gradient Coils. The static field caters for the aggregation of nanoparticles while the magnetic gradient navigates the agglomerations.Moreover, the contact forces among the aggregated nanoparticles and the wall, and the Stokes drag force for each particle are considered, while only spherical particles are used. Finally, gravitational forces due to gravity and the force due to buoyancy are added.

The method was tested through comparison against experimental and numerical data. It was found that the present method can simulate satisfactory the experiments in a stationary fluid under a steady magnetic field. Furthermore, the model was tested for the acceleration of aggregated particles under the influence of a constant and a superimposed gradient magnetic field. The results were very close to existing experimental data in terms of velocity and aggregation size and comparable to the results from existing simulations. 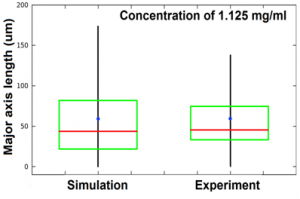 Glioblastoma multiforme is considered as one of the most aggressive types of cancer, while various treatment techniques have been proposed. Magnetic nanoparticles (MNPs) loaded with drug and magnetically controlled and targeted to tissues affected by disease, is considered as a possible treatment. However, MNPs are difficult to penetrate the central nervous system and approach the unhealthy tissue, because of the blood-brain barrier (BBB).

The Flow Analysis and Simulation Team has developed in-house computational fluid dynamics (CFD) models to simulate permeability of the BBB, investigating the variation of the endothelial cells’ geometry (Figure 1) and under varying conditions, like the imposed forces of external magnetic field and the applied pressure gradient. 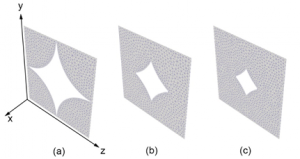 The three-dimensional Navier-Stokes equations are solved for a blood vessel taking into consideration a discrete model for the MNPs with various acting forces. The results show that when MNPs with a diameter about 100nm are exposed to an external magnetic field, the permeability can be improved up to 30%. Figure 2 presents MNPs crossing the BBB when no magnetic forces are applied (Fig 2a) and when the MNPs are navigated by the magnetic field (Fig. 2b). 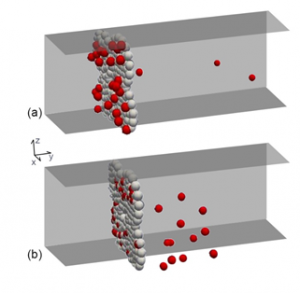