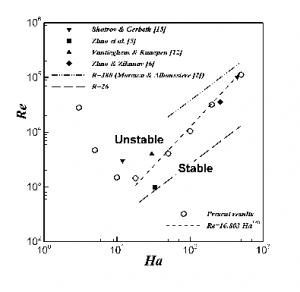 The electromagnetically driven liquid metal flow in a toroidal duct of square cross-section is studied numerically searching for the critical Reynolds (Re) and Hartmann (Ha) numbers where transition occurs. Results are reported for Ha up to 500, building a transition map of critical Reynolds and Hartmann numbers and showing two distinct regimes of transition signified by destabilization of the secondary flow: The first, for Ha<18, where the Lorentz force is balanced by fluid momentum diffusion and the second, for Ha≥18, where it is balanced by fluid inertia. In both cases, the destabilization of the secondary flow occurs primarily near the concave sidewall. For Ha≥18 transition follows approximately the relationship Re=16.803Ha1.43 for values of Re and Ha in the range: 80<Re/Ha<224.